River ice affects most Canadian rivers for large portions of every year. In the last ten years, Canada has demonstrated great leadership in the development of methodologies to monitor river ice from satellite radar data, including operating its own radar satellite with high resolution capabilities (<10 m) well suited for river monitoring. The use of satellite radar imagery to monitor river ice is reliable enough that provincial governments and public safety organisations have started to use the technology on a regular basis or in operational mode (Figures 1 and 2). 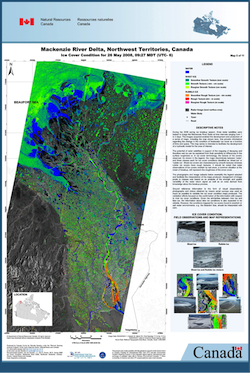 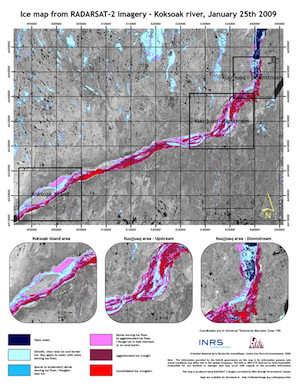 Remote sensing is a useful technology to characterize the current state of a river ice cover. Satellite images can be used to (1) support field investigations, (2) monitor the evolution of the ice cover from freeze-up to break-up, (3) allow scaling up from small areas to large areas, and (4) calibrate and validate computer simulations of river ice processes (Duguay and Pietroniro, 2005). There are, however, several limitations to satellite remote sensing. Cloud cover can considerably limit the windows of opportunity to observe the ice cover from optical satellites. Spatial resolution must be sufficiently high (less than 100's of meters) so that the presence or absence of ice within a river channel can be resolved. Repeat imagery of a river must be frequent because ice processes are dynamic events. Optical sensors such as MODIS (AQUA and TERRA satellites) (Figures 3 and 4) and MERIS (Envisat) provide daily coverage at a spatial resolution of 250m. 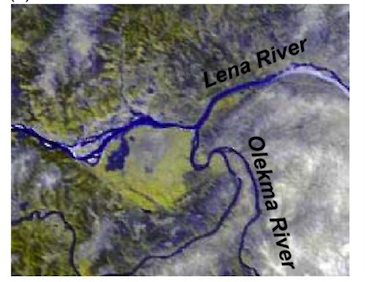 Figure 3: IMODIS colour composite illustrating the confluence of the Lena and Olekma Rivers shown during a typical break-up event (May 12, 2000) (Pavelski and Smith, 2004) 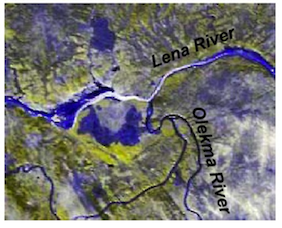 Figure 4: IMODIS colour composite illustrating the cofluence of the Lena and Olekma Rivers shown during an ice jam flood (May 15, 2002) (Pavelski and Smith, 2004)

To avoid the constraint of clouds and to monitor medium and small rivers, radar satellites offer a good alternative (radar can "see" through clouds). RADARSAT-2 and ASAR (Envisat) have proven very sensitive to river ice characteristics. The surface roughness and shape, size, and density of air bubbles are two of the main factors controlling the appearance of river ice radar imagery (Gherboudj et al, 2007). Consequently, radar can be used to discriminate between water, intact thermal ice (with tubular air bubbles), intact frazil ice (with spherical air bubbles), and consolidated ice (pieces of ice stacked together).

The Cold Regions Research and Engineering Laboratory (CRREL) of the US Army Corps of Engineers has developed an Ice Jam Database for the rivers of the northern United States (Figure 5). The database currently consists of over 18,000 records from 1780 to the present, across the US. Data come from the United States Geological Survey gauge records of peak stage and discharge events as well as newspapers, historical records, town histories, government agency reports, anecdotal reports by local residents obtained by personal interviews, and CRREL files (White, 1996). The two applications of the database are 1) characterizing ice jams on a regional basis, and 2) using ice event information in ice jam emergency response efforts. No such database exists in Canada. 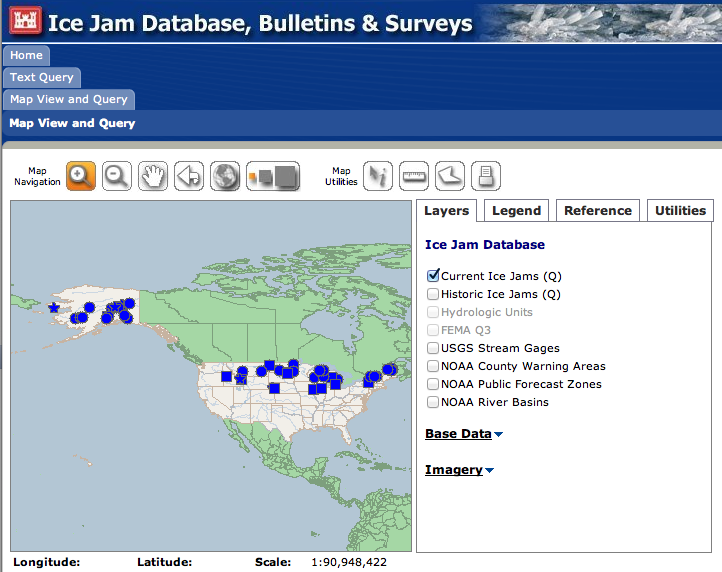 Figure 5: The CRREL Ice Jam Database provides the current state of ice covered rivers across the United States. Click on the image above to access the database. It is also possible to query the database to obtain past information on rivers.

Material on this page was provided by Thomas Bergeron and Yves Gauthier, Institut national de la recherche scientifique and edited by Maren Pauly, Department of Geography, University of Waterloo.