Frozen precipitation accumulating on a surface creates a snow cover. Snow is an important and dominant feature of northern environments with cover present for more than 6 months of the year over large areas of the northern hemisphere. Its extent, dynamics, and properties (e.g., depth, density, water equivalent, grain size, and changes in structure throughout its vertical profile) affect climate (e.g., ground thermal regime), human activities (e.g., transportation, resource extraction, water supply, use of land, and ecosystem services), as well as infrastructure, hydrological processes, permafrost, extreme events (including hazards such as avalanches and floods), biodiversity, and ecosystem processes (Callaghan et al., 2011; DeBeer et al., 2016).

The levels of precipitation and prolonged below-freezing temperatures necessary for snow to accumulate occur for various periods of time during winter over most of Canada. Figure 1 shows the mean annual number of days with snow cover from the NOAA IMS-24 km daily snow cover product (Helfrich et al., 2007) over snow seasons from 1998/99 to 2014/15. The average annual duration of snow cover in Canada ranges from a minimum of less than 1 day per year on Queen Charlotte Islands off the B.C. coast to perennial snow cover over the ice caps of the Canadian Arctic Archipelago. According to the satellite data used to generate Figure 1, on average ~65% of Canadian land area is snow covered for more than half the year, which means that snow cover is the dominant land cover in Canada. How much snow accumulates on the ground is first determined by factors influencing snowfall such as latitude, elevation, and proximity to storm tracks and moisture sources. Once on the ground the terrain and land cover characteristics, as well as interactions with surface wind, take over to determine how much snow accumulates at a particular location. Local site characteristics also play a major role in snow melt processes in the spring.

Figure 2 provides an estimate of the variation in annual maximum winter accumulation across Canada expressed as the depth of water (snow water equivalent or SWE) if the snow were melted. The largest accumulations are found in coastal mountain regions (e.g. B.C., Quebec-Labrador, and Eastern Canadian Arctic) which have large annual snowfall totals. The large amount of snowfall is related to proximity to storm tracks and moisture sources as well as orographic influences on precipitation and temperature. Snow accumulations are generally low over the continental interior where winters are cold and dry. The noticeably low SWE values over the western Canadian Prairie region are a result of the combination of low winter precipitation, winter melt events from Chinook winds and loss of snow from blowing snow sublimation. Snow cover over southern regions of Canada exhibits strong variability in response to the passage of winter storms. Current and historical Prairie SWE maps can be found on the SWE page. 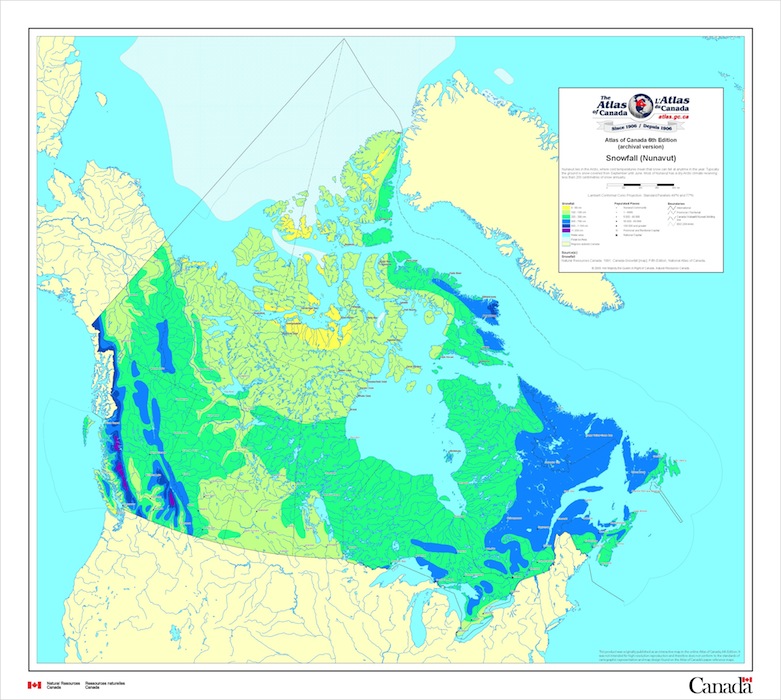 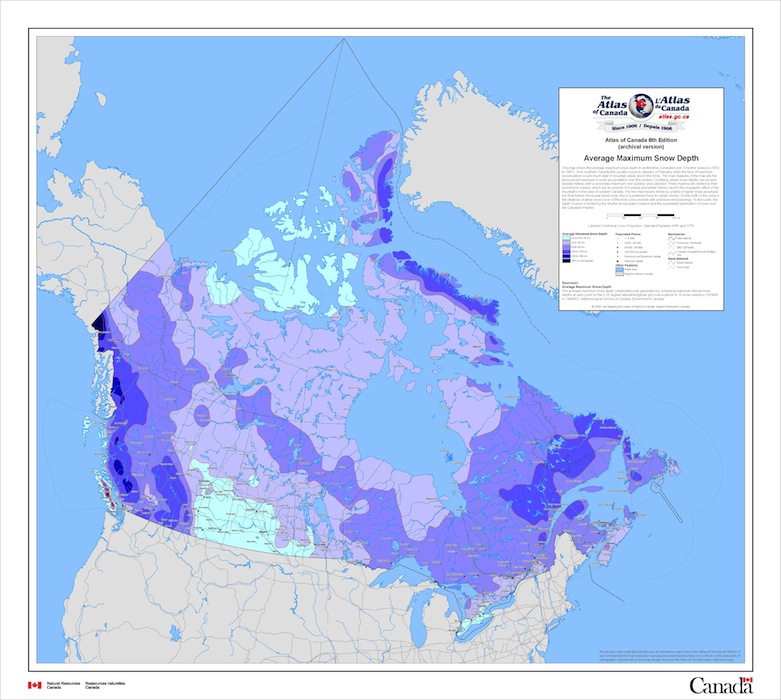