The Arctic system demonstrates a significant contrast in energy regime on the sea ice in relationship to the adjacent open water (Figure 1). A shift in regime and consequently overall energy balance is expected with sea ice loss (NSIDC, 2013). 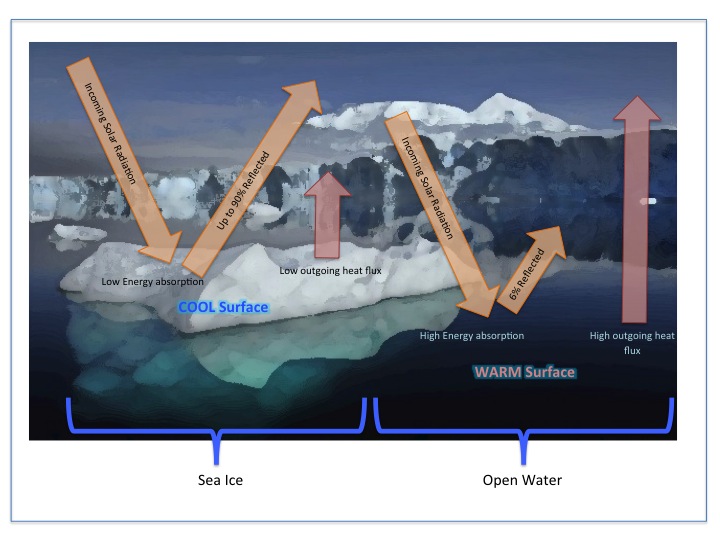 Albedo is a measure of a surface's ability to reflect incoming solar radiation. The measure ranges from 0 to 1; the percentage of energy reflected. The higher the value, the more reflective the surface; usually entities of lighter hue are higher in albedo. Sea Ice, especially multiyear ice, has a high albedo and reflects up to 90% of incoming solar radiation; in contrast, open water reflects only 6%. This circumstance allows more energy to be absorbed by the open water than the sea ice, resulting in a comparably warmer surface. The albedo of a sea ice surface is dependant on the type of ice present (See Types section). Thicker, snow covered multiyear ice reflects approximately 90% of insolation, while newly formed first year ice reflects between 50-70% (Encyclopedia of the Earth, 2013; NSIDC, 2013).

Sensible Heat describes the amount of energy expenditure necessary to modify the temperature of a material without altering its physical state. Sensible heat moves towards a cool substance, from an adjacent warmer substance. In Arctic winter, sensible heat moves from the atmosphere to the sea ice and from the warm ocean surface to the atmosphere. Overall, open ocean has a greater outgoing heat flux than sea ice. Sea ice acts as an insulator, prohibiting heat transfer between the underlying ocean and overhead atmosphere. The larger the sea ice extent, the more effective the insulator and the cooler the environment becomes (The Encyclopedia of the Earth, 2012; NSIDC, 2013).

Latent heat describes the quantity of energy expenditure required to change the physical state of a substance. As solar radiation reaches the Arctic surface, the portion that is absorbed acts as energy altering the state of the surface. The amount of radiation absorbed by the surface described the amount of radiation energy available as latent heat. Open ocean has a larger outgoing latent heat than sea ice, since it is more readily able to transform its physical state. As ocean water is transformed by evaporation, cloud formation is enhanced and water vapour enters the atmosphere. Cloud formation increases overall storm activity, with ice breakage consequences (See Ice Break-Up section). Moreover, water vapour release into the atmosphere enhances the Greenhouse Effect, leading to additional atmospheric warming through positive feedback (Betts, 2013; NSIDC, 2013).