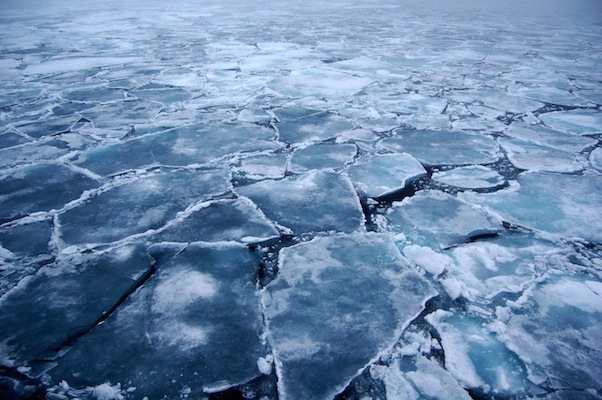 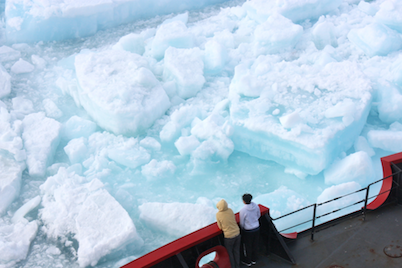 Ice that has persisted through two or more summer cycles of melt. Melting of surface layers may occur in the summer, with refreeze ensuing in winter. Within the Canadian Arctic, multiyear ice can reach thicknesses between 300-450cm. (Environment Canada, 2003)

As sea ice continues to develop from first year to multiyear ice, the ice salinity decreases as salt is dispelled into the surrounding ocean. Conequently, is summer, melt ponds of freshwater accumulate on top of warming multiyear ice sheets. If these sheets persist through the summer season, the freshwater washes out any remaining salinity from the ice sheet. This positive feedback system continues to decrease ice salinity through melt-freeze cycles (NSIDC, 2013).

The extreme seasonality in the Arctic climate is driven by the low angle of incoming solar radiation. Since this angle is smaller in the Arctic than near the equator, the energy is dispersed over a larger area, diffusing its effects. Additionally, solar days are very long in Arctic and very short (or non-existent) in Arctic winter. This variation creates a strong seasonal cycle in sea ice growth and melt. Sea ice growth begins in autumn as the atmosphere cools the surrounding ice and water. Throughout the winter season, the ice grows in extent and thickness, accumulating snow cover. As snow accumulates, the ice albedo increases, and more solar radiation is reflected (see Energy Flux Section). As less radiation is absorbed, cooling continues and more ice forms. In contrast, when the temperatures are warming in spring, the atmosphere heats up the ocean and ice, driving a positive feedback loop of sea ice melt. The amount of ice persisting after summer is dependent on the length and intensity of the melt season (NSIDC, 2013). Seasonal variation in sea ice extent ranges from 15 x 106 km2 in the winter to 6 x 106 km2 in the fall across the Arctic (IPCC, 2013).