The reductions in minimum sea ice extent will allow navigational access into the Arctic Ocean; the Northwest Passage became available for transportation in 2007 (Figure 1). Between 2010-2011 40 ships travelled through the Northwest Passage while only 69 did during the previous century. This amplified human activity in this pristine environment could lead to increased infrastructure development (SWIPA, 2011; Parry, 2012).

Enhanced ship traffic in the high latitude Arctic waters is expected to have a negative impact on marine ecosystems. Stressors associated with Arctic shipping such as chemical spills and accidents, may influence the habitat dynamics of marine mammals and fish among others (WWF, 2011). The World Wildlife Fund ArkGIS program has developed an interactive map tool, which combines human activity and ecosystem data to depict overlaps, connections and possible disturbances. Visit the ArkGIS webpage to explore the map!

As the Arctic Ocean warms, an advantageous opportunity for commercial fisheries arises with southern fish species expected to migrate northward. Overfishing of this unpredictable ecosystem could lead to conservation and management issues. Moreover, with less than adequate maps available, increased fishery ship accidents have been recorded throughout the Arctic (SWIPA Chapter 9, 2011). In addition to the development of fisheries, the pursuit for oil and gas in the Arctic waters has begun. Abundant quantities of natural gas and oil have been estimated to be available (U.S. Geological Survey) and are becoming very accessible with the loss of sea ice (SWIPA, 2011; Parry, 2012).

An additional challenge associated with sea ice loss and augmented sea travel is national boundaries, especially since many nonrenewable resources are located within the oceans. The boundary dispute is between Canada, Russia, Norway, U.S.A and Denmark. The Northwest Passage is of particular concern to Canada, who claims it to be Canadian owned waters. Nevertheless, the United States and other European countries claim it to be international territory. Additionally, Canada and Denmark are in disagreement over the ownership of the uninhabited Hans Island, located between Ellesmere Island and Greenland (Carnaghan & Goody, 2006; Case, 2012). 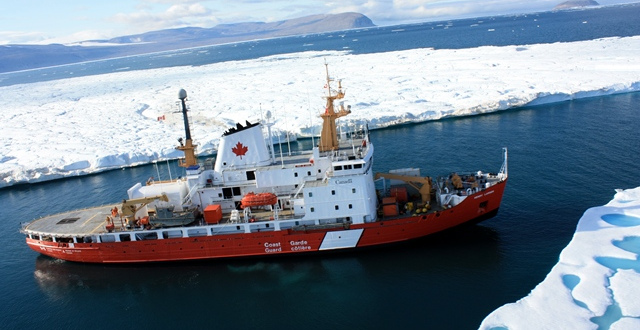 The following list of recommended future research, compiled by SWIPA (2011), will assist in the understanding of the future of sea ice and the Arctic system: