Future of Permafrost in Canada

Permafrost is a thermal condition of the ground, and therefore its existence is dependent on climate. Thus, permafrost will be profoundly affected by global warming (Figure 1). Over many thousands of square kilometres, permafrost is within one or two degrees of its melting point. The behaviour and stability of soils in cold regions is strongly influenced by temperature and therefore changes in ground thermal conditions are of great importance.

General circulation models predict that mean annual air temperatures may rise by several °C over much of the Arctic during the 21st century if there is a doubling in the concentration of atmospheric carbon dioxide due to fossil fuel burning. Arctic regions are especially sensitive to global warming, and some researchers predict the temperature to rise by 5 to 10°C (or more) during the winter months. Large areas of the Canadian north are underlain by permafrost at temperatures greater than -2°C and it is expected that most of this permafrost, which is generally less than 75 m thick, may ultimately disappear under anticipated climate warming scenarios. In areas of thicker and colder permafrost, warming would likely result in a thickening of the active layer, an increase in permafrost temperature and a decrease in permafrost thickness. Recent models predict that permafrost area may decrease by 37-81% by the end of the century (Figure 2) (IPCC, 2013). 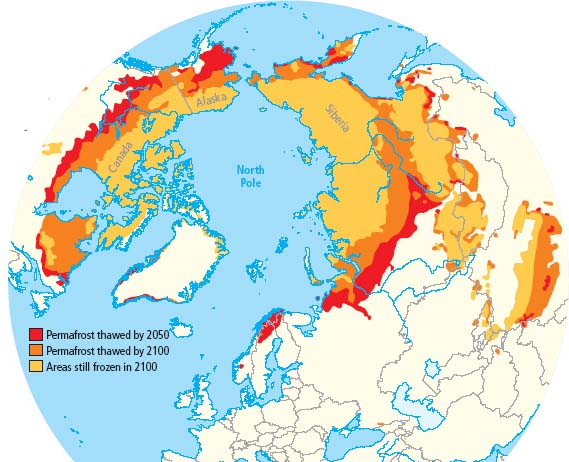 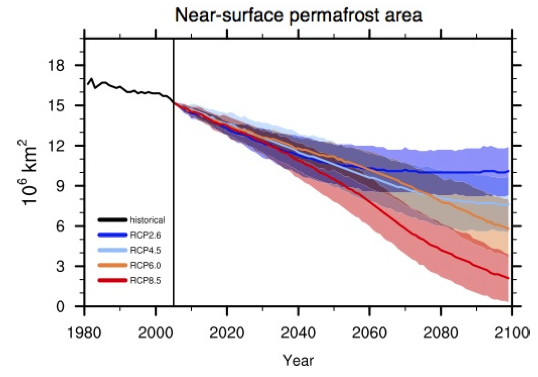 The impacts of permafrost warming and degradation will be important in regions where permafrost is ice-rich. Thawing of ground ice can result in loss of soil strength and lead to ground instability which has important implications for many landscape processes and hazards such as increased terrain, slope and coastal stability. These changes as well as associated alterations to surface hydrology, groundwater regimes, and surface vegetation have consequent socio-economic impacts for ecosystems, infrastructure and development. In addition, climate warming in permafrost regions will also affect the carbon cycle through changes in greenhouse gas sources and sinks associated with thawing or burning of permafrost-affected peatlands. An assessment of the impact of climate change on permafrost is necessary to determine whether adaptation measures will be required.

Material for this page was provided by Margo Burgess and Sharon Smith, Geological Survey of Canada and edited by Maren Pauly, Department of Geography, University of Waterloo.