Lake ice within the Arctic undergoes seasonal changes throughout the year (see Seasonality section). During the spring and summer, lake ice melts as temperatures increase. The length of ice-free conditions is dependent on the local summer conditions. Following the ice-free (or reduced ice) season, the lake goes through a freeze-up process. Succeeding initial freeze, the ice continues to grow throughout the winter season. Currently, lake ice freeze up (Figure 1a) occurs earlier, and ice break-up (Figure 1b) occurs later in higher latitude regions in comparison to more temperate locations. Additionally, the Arctic is currently experiencing anomalies in lake ice freeze-up, break-up and ice duration throughout the Northern Hemisphere (Figure 2) in comparison to trends seen since 1860. These trends of later freeze-up, earlier break-up and shorter ice season duration are attributed to increased Arctic temperatures from climate change (SWIPA, 2011; Dibike et al., 2012). 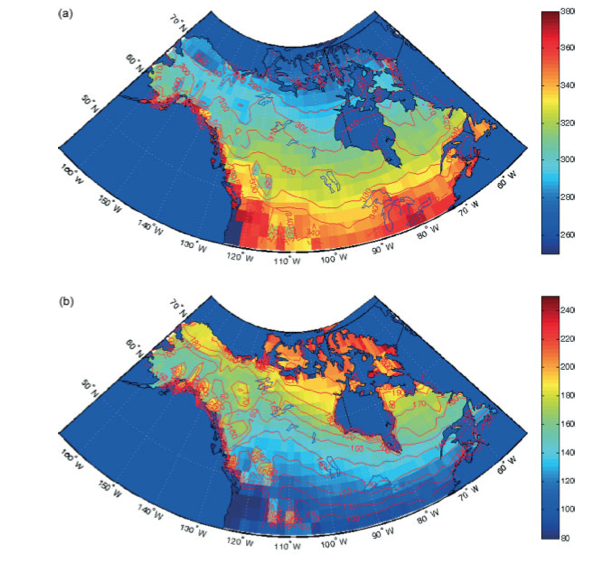 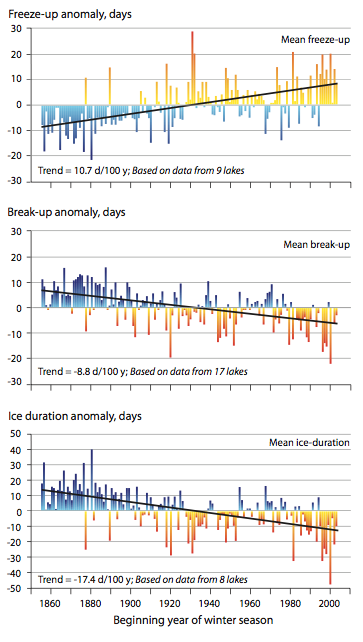 Warmer arctic temperatures are responsible for a very recent melt in Canada’s northernmost lake. Ward Hunt Lake has had thick perennial ice for at least the past 50 years. Recently, however, it has melted to a point where the lake is ice free for a short period in late summer months. The lake now has freeze-up and break-up dates when it never had them before. The melt that occurred is directly related to warm air temperatures as well as warm water inflow. Ward Hunt Lake is an example of the shorter ice season duration trend resulting from climate change (Paquette et al., 2015).

Material on this page was provided by Maren Pauly and Tristan Mills, Department of Geography, University of Waterloo.