The Great Lakes bordering Canada and the United States are Lake Superior, Michigan, Huron, Erie and Ontario (Figure 1). Lake Superior is the largest, followed by Lake Huron, Michigan, Erie and then Ontario. Lake Superior is also the deepest, reaching depths of over 400m. The second deepest is Lake Michigan, with depths of over 280m, followed by Ontario, Huron and then Erie. The individual lake regimes (Lake ice freeze-up in Figure 2 and ice break-up in Figure 3), as discussed below, are greatly influenced by lake location, depth, size and climate (Environment Canada, 2013). 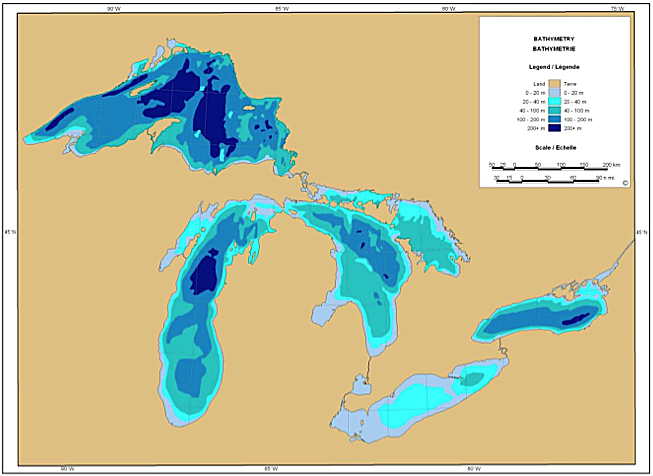 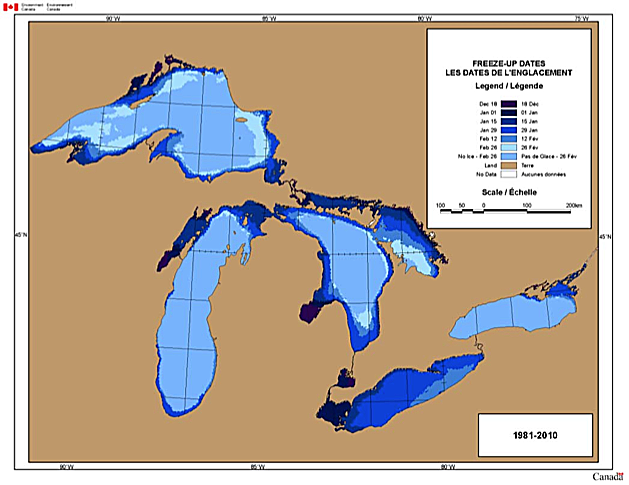 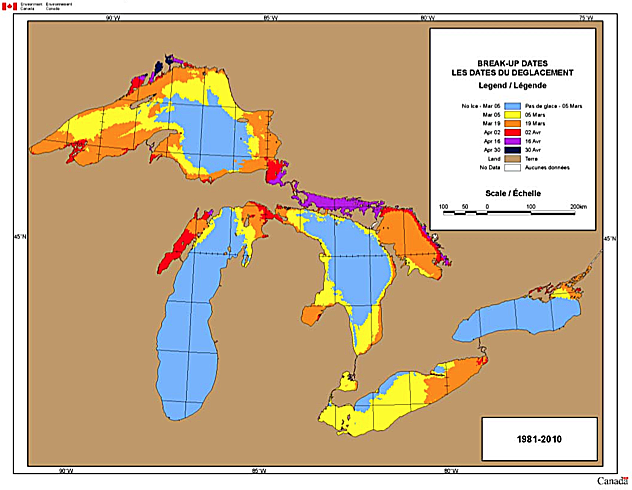 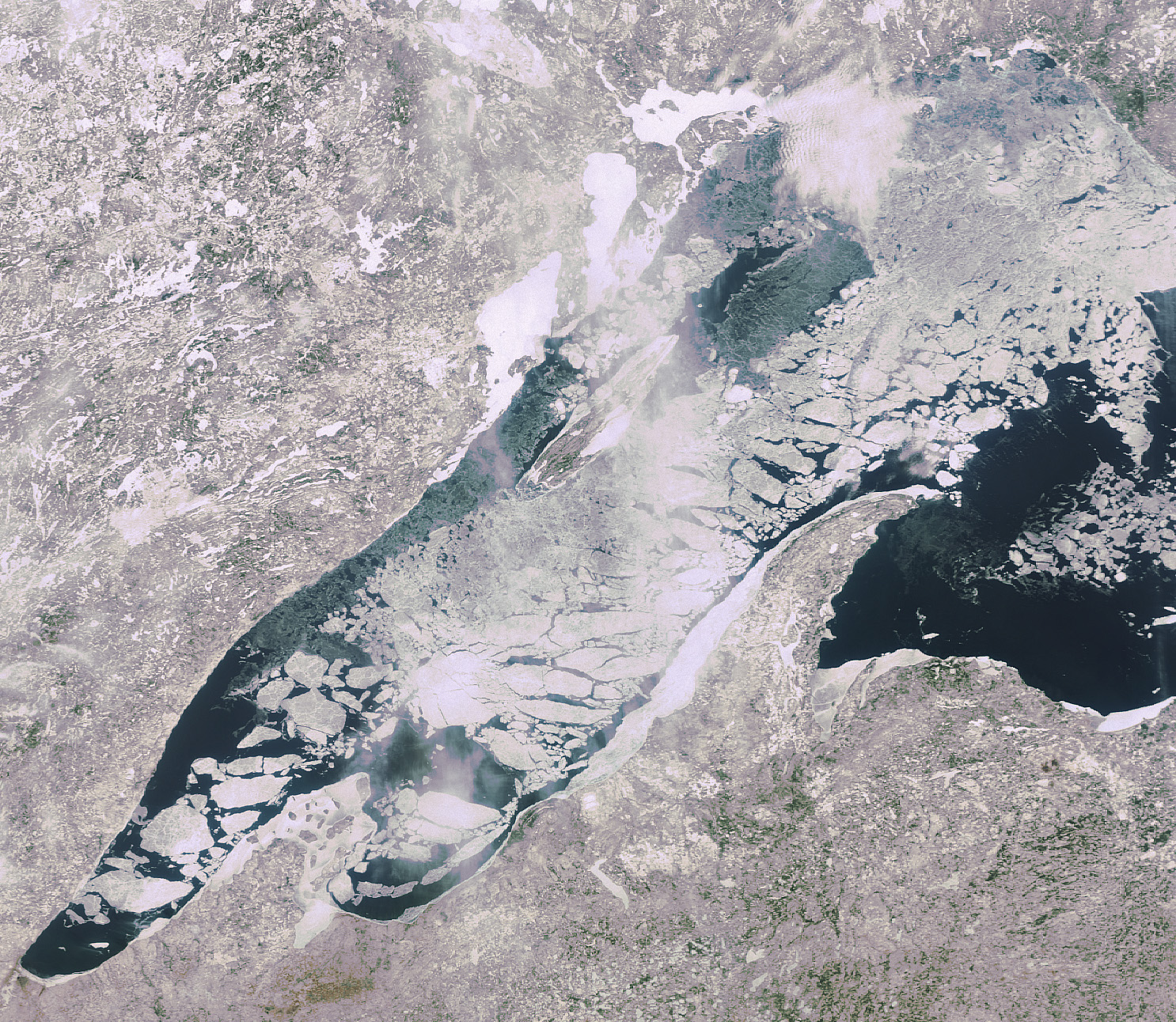 Lake Superior
During the final two months of the year, the marginal northwest lake regions begin to freeze. Ice continues to grow along the whole lake border, and then spreads into the inner regions of the lake. The entire lake does not usually freeze over; approximately ¼ remains open in the southeast. The ice condition peaks around February, with ice break-up commencing in March; most of the lake is ice-free by the end of April. 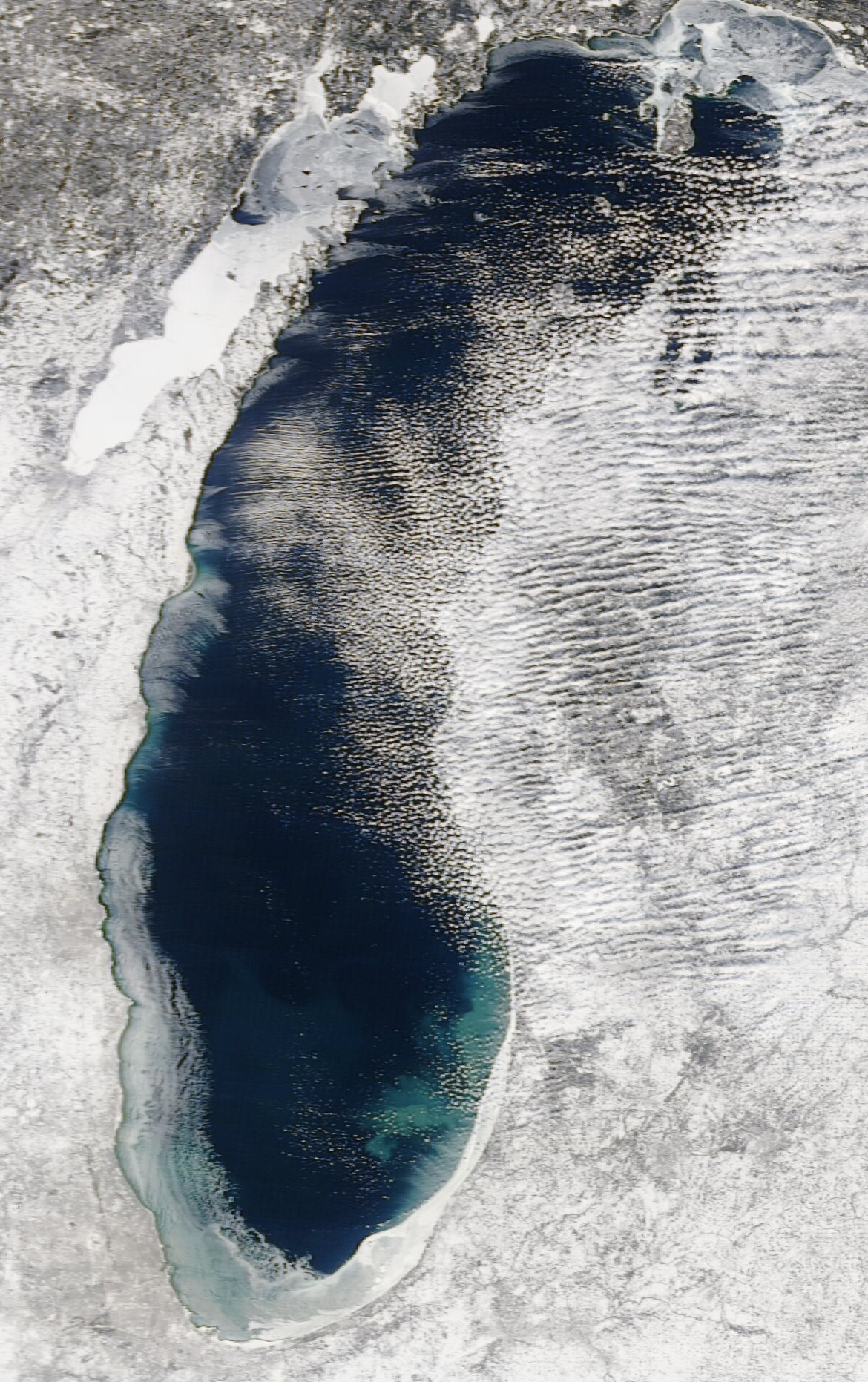 Lake Michigan
Freeze-up usually begins in the last month of the year in northern Lake Michigan regions, particularly in the Green Bay area. Ice growth continues southward along the margins, until peak ice develops, covering approximately ¼ of the lake area by February. During the end of February, break-up originates in the southern regions, until the lake is completely ice-free by April. The great temperature gradients from north to south on Lake Michigan makes ice regimes highly variable spatially. 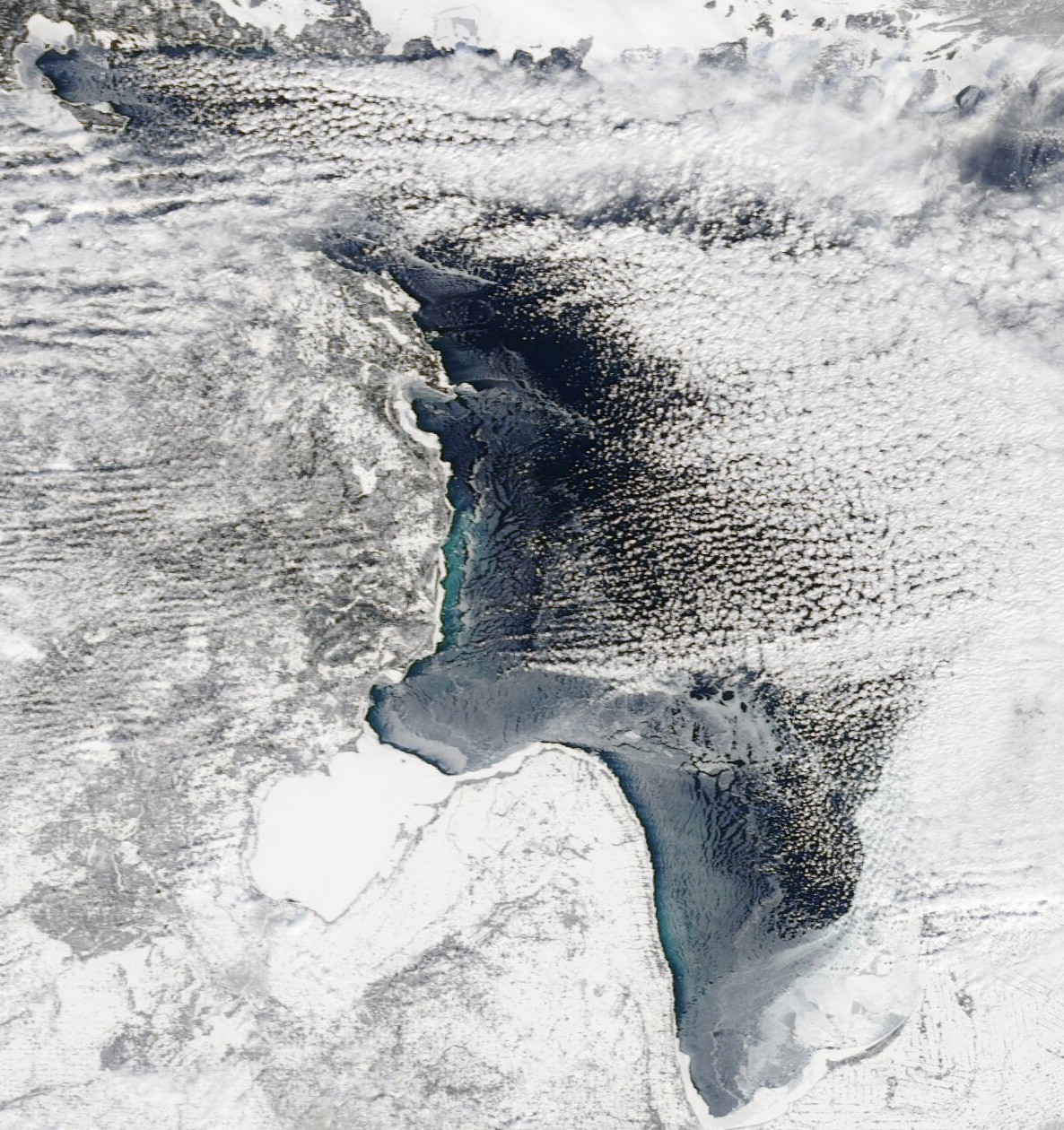 Lake Huron
During the last month of the year, ice begins to develop along the lake marginal regions, particularly in Georgian Bay and the shallows of Shaginaw Bay. Throughout the winter, ice growth thickens along the border and spreads into the middle of the lake. In February, at the peak of lake ice condition, coverage is typically 50% of the total lake area, with the vast majority of Georgian Bay being completely covered. Expanses of the lake, which exceed 100m in depth (northern regions), usually remain ice free throughout the year. Break-up of ice usually takes six weeks, beginning in March and ending in mid-April.

Lake Erie
A couple weeks before the end of the year, freeze-up begins in the western area of Lake Erie. This ice cover continues to grow over the next couple months until only 30% of the lake is ice-free. Freeze over moves quite uniformly from west to east, with heavier freeze-over in northern margins. Following ice peak in February, break-up begins, ending in early April.

Lake Ontario
Lake Ontario is the smallest of the Great Lakes and begins to freeze the latest, near the end of December. Ice first develops in the northeast regions, feeding into the St. Lawrence River. This freeze-over covers less than 1/5 of the total lake area at annual ice peak in February. Following peak ice condition, break-up begins in the same month and ends in March.
Environment Canada, 2013. Click figures for larger images (Earth Snapshot).