Past Variability of Permafrost

Permafrost is a thermal condition and therefore its occurrence is dependent on climate. Climate, however, is not constant and historically has undergone significant changes detectable at time scales from decades or centuries to millennia (Figure 1). During periods of cooling, permafrost may increase in both areal extent and thickness, while a warmer climate may cause an increase in active layer thickness, permafrost thinning, and in some cases, disappearance.

Not all permafrost present today is in equilibrium with the current climate. Thick permafrost beneath the Beaufort Shelf is a relic of periods of lower sea level associated with the last glaciation. During this time, large areas of the continental shelf were above sea level and exposed to the intense cold of a full glacial climate. This allowed the formation of permafrost up to 700 metres in thickness. During interglacial periods and in postglacial time, these areas have been covered by Arctic Ocean water with a mean annual temperature 10 to 15°C higher than air temperatures during glacial periods. The thermal regime of the subsea permafrost is thus in disequilibrium with the present marine environment. The sediments therefore are warming gradually, causing the permafrost to slowly degrade. 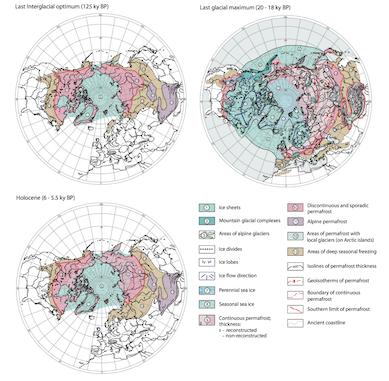 Material for this section was provided by Sharon Smith and Margo Burgess, Geological Survey of Canada