Lake ice models provide the ability to assess changes to the ice cover using projected climate conditions from global or regional climate models. Recent work has provided predictions of future ice cover conditions by mid-21st century throughout Canada by using lake ice models and future climate scenarios from the Canadian Regional Climate Model (CRCM). Since snow cover plays an important role on the seasonal evolution of the ice, some of the future ice cover predictions were created both with and without snow cover on the ice in order to represent the effect of wind redistribution of the snow across the ice surface. Generally, ice cover break-up dates through Canada are expected to shift from 1.5 to 3.5 weeks earlier while freeze-up dates are expected to be delayed by up to 2 weeks. The resulting ice cover duration is expected to decrease by up to a month depending on the depth of the lake (with greater reductions found for deeper lakes) (Brown and Duguay, 2011; Dibike et al., 2011). Lake ice thickness was predicted to decrease by an average of 20-30 cm, with some areas up to 50-60 cm less. The amount of ice thickness reduction was also affected by whether or not snow cover was present on the ice surface, with more reduction to the ice thickness with no snow cover on the surface. Figure 1 shows an example of possible changes to the freeze-up and break-up dates as well as the mean maximum ice thickness.

Another model created by Shuter, Minns & Fung, (2013), was created to find how many days later that lake ice in Canada would form and how many days earlier it would break apart. Their models are based on IPCC A2 emissions scenario and ended by 2055. At the end of their models they found that freeze-up would occur 10 days later on average and break up would be between 0 to 16 days earlier. They also noted that higher latitude lakes, such as those in Canada’s arctic, would be more susceptible to changing conditions. 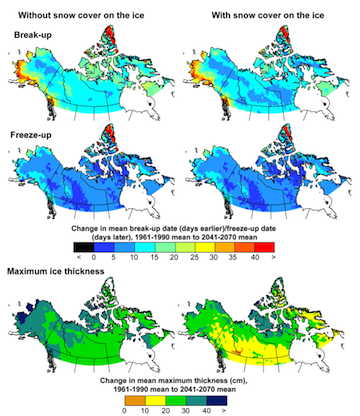 Figure 1: Predicted changes to lake ice break-up and freeze-up dates in the North American Arctic, as well as predicted changes to the ice cover thickness from the 1961-1990 mean to 2041-2070 mean (Modified from Derksen et al., 2012) 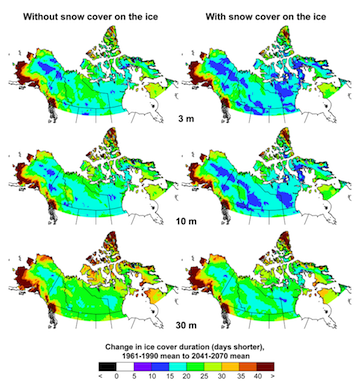 Figure 2: Change in ice cover duration by the mid-21st century for three hypothetical lake depths, both with and without snow cover on the ice, based on a future climate scenario (modified from Brown and Duguay, 2011). 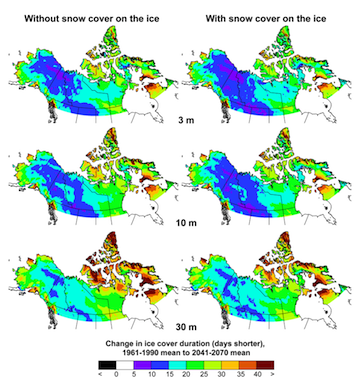 Figure 3: Change in ice cover duration by the mid-21st century for three hypothetical lake depths, both with and without snow cover on the ice, based on a second climate scenario (modified from Brown and Duguay, 2011).
Click figures for larger images

Variability exists between different future climate scenarios and comparing future lake ice conditions produced by different climate scenarios allows for some measure of uncertainty in the range of dates and thicknesses produced by the simulations. Three primary areas of uncertainty in the ice cover predictions were identified in simulations run using the Canadian Lake Ice Model (Brown and Duguay, 2011) with two different climate scenarios from CRCM: the Alaska coastal areas, the eastern Canadian Arctic Archipelago (CAA) and the Baffin Island/northern Québec region. The variations in these areas were shown to be a reflection of the different patterns of temperature change between the scenarios by the time they evolve to the 2041-70 mean. One climate scenario showed the greatest warming over the Alaska region in the fall and winter, while the other had the greatest warming in the Québec/Baffin region in the winter and the CAA in the fall. The break-up and freeze-up dates were generally within 5 days for the two climate scenarios, except for the three main areas of uncertainty where differences ranged up to three weeks. Both future climate scenarios produced a drastic reduction in the areas where occasional summer or perennial ice cover is found. Figures 2 and 3 show the variations in ice cover duration for two possible future climate conditions, for three different lake depths (3, 10 and 30 m deep lakes), both with and without snow cover on the ice.

Material on this page was provided by Laura Brown and Tristan Mills, and edited by Maren Pauly (all Department of Geography, University of Waterloo)