Global Climate Models (GCMs) project significant warming and increased precipitation over much of Canada over the next 50-100 years in response to increasing concentrations of greenhouse gases (GHG) in the atmosphere. The magnitude of the projected changes varies with season and region, with the largest increases in temperature and precipitation projected to occur over northern regions in winter. Figure 1 shows projected warming trends across Canada. View projected warming changes on Environment Canada's Centre for Climate Modelling and Analysis webpage and also at Canadian Climate Data and Scenarios webpage. 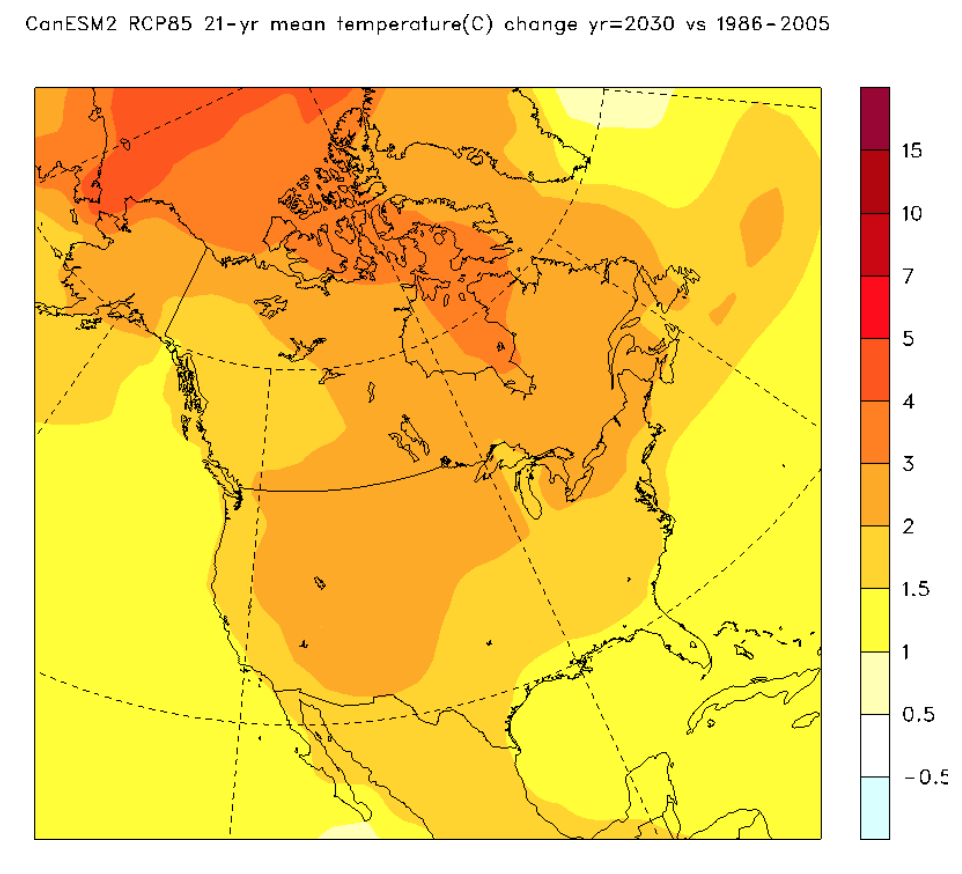 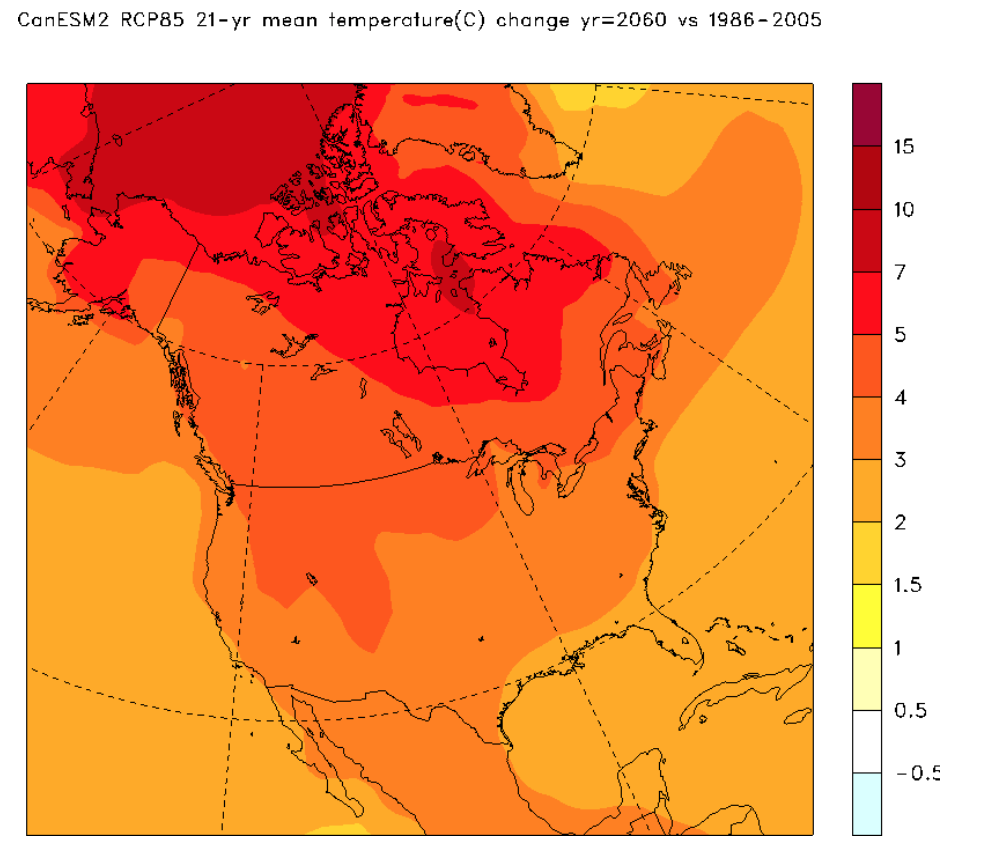 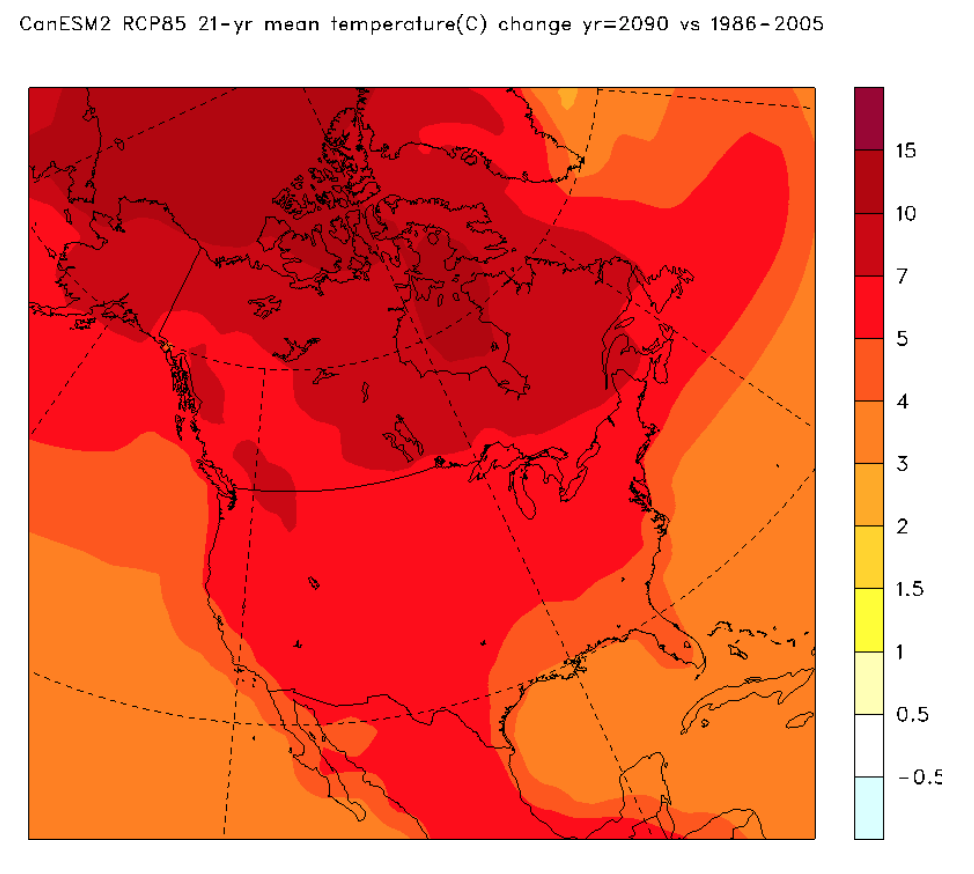 Scenarios of future snow cover change are needed for a wide range of needs from ecology (e.g. species range assessment) to water resources (e.g. river runoff). A number of methods can be used ranging from simple extrapolation of observed trends for shorter time periods, to longer-term simulations from climate models that take into account future changes in the concentration of GHG in the atmosphere (see Mearns et al. 2001 and 2003 for a discussion of the different approaches). The method selected depends strongly on the spatial scale of the application and the time horizon. For example, the spatial resolution of the GCM runs used in the 5th IPCC assessment (IPCC 2013) is on the order of 100-300 km which may be appropriate for continental-scale applications, but will likely be too coarse for local applications, particularly in areas of complex terrain that may not be adequately resolved by the GCMs. The “downscaling” of GCM output to the resolution required by decision makers can be achieved through statistical relationships (e.g. Wilby et al. 2004) or by using the GCM output to drive a higher resolution climate model focused on a smaller region (a Regional Climate Model or RCM – see review by Laprise 2006). Further information on scenario development can be obtained from the Canadian Climate Change Scenarios Network.

Northern Hemisphere spring snow cover extent is projected to decrease rapidly by the end of the century (Figure 2) under the RCP8.5 scenario where no efforts are made to curb global CO2 emissions.

Results from multiple GCMs indicate the largest relative decreases are likely to occur over coastal regions in Canada with decreases getting smaller moving north and in from the coast (Figure 3). High latitude regions of Canada are projected to experience little change in snow cover duration in response to increased winter precipitation. These small decreases are not considered realistic as actual satellite observations show that snow cover duration is currently decreasing faster over northern latitudes than further south (Déry and Brown, 2007; Brown and Mote, 2009). 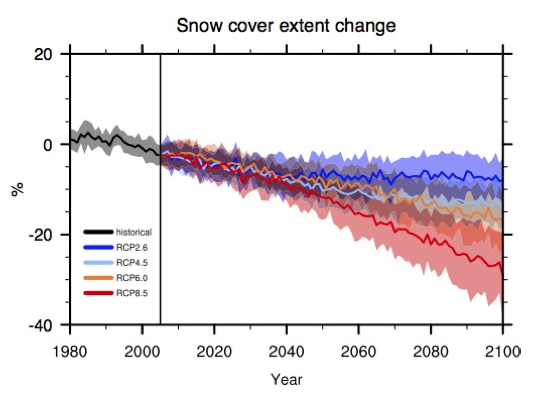 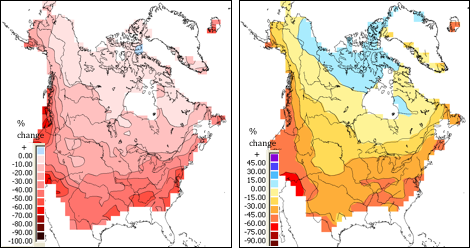 Figure 3: Projected average change (%) in annual snow cover duration (left) and maximum monthly snow accumulation (maximum SWE, right) for 2050 (2040-2069 minus 1970-1999) with the SRES A2 emission scenario from an ensemble of climate models from the CMIP3 dataset (further information in Brown and Mote, 2009).
Click figures for larger images

The use of climate model output from climate change scenarios requires an appreciation of the cascade of uncertainties involved (see Jones, 2000). There are uncertainties associated with the future GHG emission estimates (scenarios) used to drive the GCM climate change projection, with the physics and feedbacks used in the models, and with noise from variability naturally present in the climate system (and simulated by global climate models). The magnitude of the uncertainties is also location dependent. In practice, output from multiple GCMs and multiple model runs (with different initial conditions and emission scenarios) are frequently used to bracket some of the main sources of uncertainty.